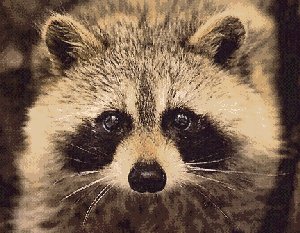 Raccoons are familiar animals with masked faces and ringed tails. They have five toes on both the front and hind feet. Their long, dextrous fingers enable them to open latches, untie knots, turn doorknobs, and open jars. Their prints look like tiny human baby handprints and footprints.

They are primarily nocturnal and thrive in many cities as well as wilderness areas. In fact, the densest population of raccoons in New York is in New York City. They are very intelligent and adaptable animals.

Their tracks are commonly found near water. It is widely believed that raccoons always "wash" their food. This is not true. They exhibit a behavior called "dabbling" in which they dunk their food in water. This helps enhance their sense of touch and helps them find food underwater by feeling with their sensitive fingers. It also enables them to sort out items that are not edible.

During cold weather, raccoons will sleep for several days, but do not hibernate.

Raccoon scat is tubular and blunt on the ends. Scat may contain parasites that can get into human lungs, so handling it is not advisable.

Three to six young are born in a hollow tree den in April or May. Their eyes open at three weeks. They remain in the den for two months. Young stay with the mother until the following spring.

Raccoons are well known for their curiosity and mischievousness.

I have tracked many raccoons in different environments. They seem to be found almost everywhere I’ve lived, from the desert to the northern California redwood forests. The raccoon is one of my favorite animals.

Here is a picture of a raccoon print on my truck window.

I was camping at Patrick's Point State Park and had some food in the car. When I looked around the campsite in the morning, I found raccoon tracks all over my truck. This print was on a window. Looking for a way to get to the food, the 'coon had tried every window to see if any were open. Pretty smart raccoon!

I have had the opportunity to see them up close, feed them, and even touch a baby raccoon. They are intelligent animals and learn quickly how to get food from gullible humans such as myself. I lived near one family of raccoons who learned to come by my place just after dark for a handout. When I wasn’t waiting for them, they would scratch at the door and bang things around outside to get my attention. The following summer, a new raccoon family showed up. They must have been the children of one of the first raccoons because they knew how to get my attention when they wanted food. These were the raccoons who let me touch them. Maybe, after two years of getting handouts from me, they decided to trust me enough to let me get that close.

Here are some pictures of the raccoon family.

The first raccoon was camera shy, but the others thought nothing of raiding my picnic table with me standing right by it. They are now the most famous raccoons in Humboldt Redwoods State Park. (Probably the only park raccoons on the Web.)

As I stated earlier, I have found raccoon tracks in numerous places. Two of the most unlikely places were the backyard of my home in Whittier, California, and in the riverbed of the Los Angeles River in downtown Los Angeles. Both locations were far from the wilderness areas we usually expect to see these animals in.

I was a young naturalist when I found the prints in Whittier. The raccoon had climbed over a cinderblock wall to get into our backyard. It left several good prints in the soft garden soil. It then went over to the plastic swimming pool cover, which was full of water because it was winter. In the dirt that had accumulated under the water on top of the pool cover, I found the trail of the raccoon. All five toes were clear. The animal had walked around, curiously investigating this new body of water. Perhaps it took a drink before it climbed back over the wall and went on its way. I had a hard time convincing people that those really were raccoon tracks. They couldn’t believe that such animals were found in the suburbs. They, like most of us, believe that animals live in the wilderness, that the city is too sterile for animals to live there. (As a side note, no one believed me when I saw a coyote run down the street in front of the house either. Neither did they believe that there were opossums climbing around on the telephone lines outside.)

But, the animals are there. If you know what their tracks look like and learn a little bit about their habits, you may be able to find them near your home too. In the bed of the Los Angeles River, with a busy freeway overpass humming with traffic above, train tracks along both banks, and cars and people everywhere, I found the tracks of a raccoon. The trail led to a culvert, which I assumed was the animal’s home. There were other raccoon tracks as well. These animals were living surrounded by humanity and civilization, yet their existence was secret. Why? Because most of us don’t know how to recognize the signs of their presence. Hopefully, this web page will help you learn how to recognize those signs.

Got a raccoon story? E-mail me and tell me about it.

Raccoon family pictures by Kim A. Cabrera. Other 'coon pics from Webseek.