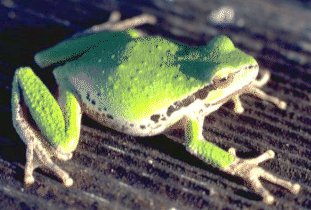 The Pacific treefrog is a small frog common in California, Oregon and Washington. In the spring, their calls are commonly heard near riparian areas. They are the only western frog whose call is a ribbit. Their toes have little rounded toe pads on them. These help the frog to climb and stick to things. Pacific treefrogs can be either green or tan in color, but all have a dark eye stripe. Eggs are laid underwater, attached to vegetation, in clumps about an inch in diameter. The tiny eggs are visible as dark dots in the jelly-like egg mass. As they develop, you can see the tiny tadpoles grow tails. When they are about ready to hatch, the tadpoles will start to squirm inside the egg mass.

Treefrog tracks sometimes show the outline of the animal’s entire body. They move about by hopping. You will find all four feet and sometimes even the impression of the frog’s belly in the tracks. Look for their tracks near water. I have even found them in sand dunes near the ocean, although the frogs did not go into the salt water. Hind feet are larger than the front ones and show five toes. Front feet are turned inward and have four toes.

Everywhere I have lived in California, I have heard these frogs. They are common and very pleasant to listen to on warm evenings. I find their egg masses in roadside ditches on old logging roads and in small puddles everywhere. The tiny eggs are no bigger than a grain of rice. The whole mass would fit in a teaspoon. It's neat to watch the little tadpoles grow inside their jelly cases. When they start looking like tadpoles, you can gently nudge the egg mass and they will squirm around inside. Don't be too rough with the egg mass though. You don't want to damage them.

I've moved the egg masses from puddles that were in danger of drying up. I put them in larger bodies of water so they'll have a chance of surviving. If you do this, be very careful to attach the mass to something so it doesn't wash away. When you find the mass, it's probably attached to a stick or something. Try to move the anchor with the mass if possible. I wouldn't move one unless it was in danger of being destroyed or dried out.

I think all treefrogs are fascinating creatures. The Pacific treefrog can be either green or a tan color, but they always have that eyestripe.

Got a frog story? E-mail me and tell me about it.