Wild turkeys are native to the southeastern United States. They have been introduced in many parts of the west, including California. They prefer oak woodlands, but are found in grasslands and pine forests as well.

They are swift runners and are wary of people.

Turkeys are polygamous. The male struts with his tail fanned to attract a harem. (See pictures below.)

Where they naturally occur, wild turkeys were used by Native Americans as food. Some tribes refused to eat turkeys, believing that the birds were stupid and cowardly. The people feared that eating the birds would cause them to acquire some of these characteristics.

Turkeys lay eight to ten buff colored eggs with brown spots. Eggs are laid in a shallow depression in the ground, lined with grass and leaves. The typical call is a gobble.

I have seen wild turkeys frequently. When I attended a recent tracking class at Henry W. Coe State Park in California, I camped in the park. The wild turkeys would call every morning and we would see them walking right by the campground. The males fan their feathers and call to the females. On the property I caretake, turkeys are sometimes seen in the trees. I often hear them call from the tops of trees. For such a large bird, they can be difficult to see through the foliage. My cats watch the turkeys in fascination. Obviously the biggest bird they've ever seen!

Here are some pictures of the turkeys that live in my "back yard." 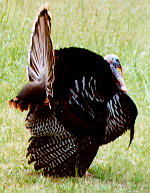 Got a wild turkey story? E-mail me and tell me about it.